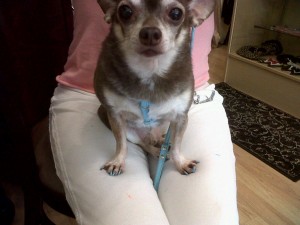 “Mans best friend”—it could seem a lil cliche,but…..not this time. Often the butt of many 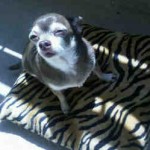 a joke in my circle of family &friends,my”relationship”with my dog HARRY, could be described as a bit obsessive. After 13 years together,this chihuahua and I have officially progressed to such co dependent state. We’re talking full- on separation anxiety for both of us when we’re apart.

I joke and call him the “stalker” since he follows me from room to room, waits and scratches outside a closed door,until I open it for him. No one who has ever been around us very much will even dog sit because of the relentless whingeing & whining while he waits for my return. In all fairness, I kinda freak out a bit myself if I’m away from him more than 2 days. ANXIETY attacks have been known to occur. I do have full conversations with him,and of course that’s because he always agrees and thinks I’m fabulous& brilliant. WE ARE crazy.!!!!!!scratch that, I am crazy Crazy like a Koo Koo bird for this devoted dog.

I’m not sure WHO the master is in this– or WHO the crazier one is, but it doesn’t matter 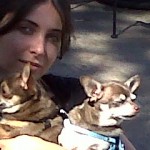 either way. My daughter Brittny calls HARRY the “WIZARD”since he possesses some other world kind of characteristic. A very wise old soul. An observer My GUARDIAN–all 6 pounds of him. (Could be in the water around here)Often, I do an old Indian ritual, spiritual cleansing of vibrations & energies in my home. Its called “sageing”.-(burning of sage) Unlike his companion,5yr old Frankie,he calmly sits on his pillow- throne as the grey smoke billows. Frankie runs for the hills at the first whiff. Like he “gets” it.You know what?I’ve figured it out!

My bond with HARRY is not just about “now”or the present. He is my connection to EVERYTHING in MY past 13 years. Most importantly my Mom,memories of holidays,special occasions,past loves,homes….. He is my living proof that it all existed. He was there thru it all. And, He’s non-judge mental.

When I look at his big round eyes,crooked tail & his ridiculously BIG ears, I giggle I know that I have been blessed with the sweetest most loving,forgiving soul. And I say this…… even when he misses the target on a wee pad by at least a foot. In some weird

indescribable way, he has taught me humility. He’s loved me just the same whether I drove a truck or a Mercedes, lived in an apartment or a house. I can not bring myself to imagine the day we will not have each other. I DO know I will never try to replace him. I really AM convinced we’ve shared a past life together…Maybe he was my horse on a battlefield…..Maybe my knight in shining armor. 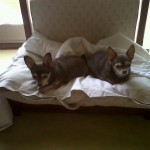 The line is blurred. When people say their pet is like human I say “HELL NO!!!” —he’s WAY better than that   loving,trusting,devoted,emotional,

One thought on “He’s NOT Just my Dog”